“Boys Will Be Boys” 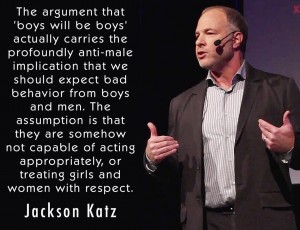 (Image courtesy of A Mighty Girl)

No matter how many times I reiterate this conversation here at Gallant Girls, it never quits being at the foundation of what is the root of OUR problem when it comes to sexism, misogyny and objectification. This mentality is at the base of what has gotten these three problems in our culture to spiral so far out of control. Making excuses for indecent and detrimental behavior and thought processes is what drove us here from the genesis, and it continues to, because even as far as we have come in equality, we have fallen further down the black hole in how much we find it fully normal to objectify women as sex objects first, and all else later. Men are taught there are certain “kinds” of women to treat with respect, all the while feeling like it’s perfectly alright to objectify, slander and degrade other kinds of women. The bottom line is that these women would cease to exist if there were not men out there to feed these women’s own lack of respect or degradation of themselves. Without the “boys will be boys” mentality, there would not be women for these men, and THAT is the issue we need to address. Sure, there will always be women just as offensive and immoral as men (so I do not wish to only discuss one gender over the other in the least), but it would be dishonest to say that the cycle begins with these “excuses” when dealing with the inequality between men and women. Excuses such as “boys will be boys” has perpetuated the problem of how some women choose to see themselves in society, and not just how men feel they are allowed to.

Even with the most sophisticated and higher-minded group of people who walk this earth, there are still so many people who find this battle for human decency to be too big to get a grapple on. With the history of humankind, we still hear a plethora of excuses: “It all goes back to the caveman days…”, “Prostitution is the oldest job in history…”, “Sex sells…”, “So long as she’s legal…”, “Boys will be boys…” These may be facts, but they’ve become facts because in this one way, we have not evolved based on repeating these degrading and detrimental statements throughout it…

This is lazy, and this is happening because we’re STILL making excuses, either to continue to be those people who don’t want to change or admit they are treating women like second class citizens, or they just don’t have the stamina to fight against something that does not seem like it affects them. Our children can hear the talk, but they can also see the walk. If you’re teaching your daughters to be respected by men, than not respecting women yourself, than that’s a failure. If you’re teaching your sons to respect women, but then you’re with men who don’t respect you/you don’t respect yourself, than that’s a failure. You can’t teach what you don’t do. This issue affects everyone, not just women. Conquering something this wildly misguided and out of control may seem futile, but it starts in the home. It starts with teaching our children that these old objectifying and sexist acts of inhumanity are abusive and devaluing, and what we need in order to treat people with dignity and virtue is a stronger-minded and more morally principled society. Again, it starts one person at a time, and this is something we can change by educating our youth. We can raise a better generation of people that do not dishonor other people for opportunistic personal pleasures by quitting with the self-serving excuses.

Sexuality is a fundamental part of life. Having healthy sexuality IS healthy. Sex is an incredible gift of pleasure we get to experience in our lifetime that is glorious! No one should condemn it, BUT it needs to be done without condemning and dehumanizing someone else. Whether or not any of us want to admit it to ourselves, women are dehumanized every day, and too many of them know it but feel as though it’s their lot in life based on what they are fed — they are not acceptable women unless they are sexy, appealing and an object of fantasy. With media and the “boys will be boys” mentality feeding this to them on a daily basis, they have just come to accept it no matter how much they feel its weight and burden on their worth, or how incredibly unjust it is. All of these aforementioned “excuses” are a deterioration and decay of humanity as a whole, but it also perpetuates the deterioration and decay of women one girl, teenager and woman at a time. It’s up to YOU — each individual — to decide if you want to play a part in that by being lazy, apathetic, or turning your head to the truth behind all the lies we use to let us off the hook as a civilization. It CAN be better, but each and every one of you need to be, first. This means all of us, as a whole — both genders, all cultures, and underneath each and every roof on this planet.