Are Our Smartphones Making Us Socially Rude and ‘Dumb’? 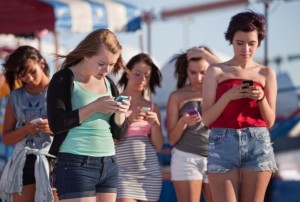 I am a mom to a preteen. All her friends have phones and she is always asking me when she will get one. I have a lot of reservations about getting her a phone. I have talked to a lot of people about this and they all look at me like I have a third eye. I guess my opinions are not the norm around other parents. Today I was online and I saw a post where you mentioned your daughter is 11. I thought I would take a chance and just ask you what your thoughts are on cellphones for a preteen.

Firstly, I would like to apologize for taking so long to respond. I usually try to get to Dear Gallant Girls letters within 2 weeks, but I got the flu the day after Christmas and it’s been a whopper! I have barely been out of the house, but I have also barely been able to keep up with commitments, let alone form a coherent thought. I even had to push back a meeting with a publisher; it’s been that debilitating! So, I hope my response is still even relative after this much time has passed and the holidays are over. Again, I apologize for the delay.

What’s interesting is that this topic just came up amongst a group of moms today and after I responded to them, it reminded me that I could take this leisured Sunday to write you back. This seems to be a pretty big concern/dilemma for a lot of parents, actually. 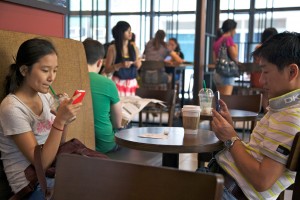 Yes, my daughter is 11 years old and she does NOT have a phone. Like your daughter, she asks us often when she will be allowed to have one. I am just frank with her and tell her that I do not know for certain, so I do not want to even say when she *may* get one. I am waiting for many reasons — like signs of responsibility and age appropriateness — so that I have a firm idea what exactly she will try and use it for. However, I have a much bigger reason that keeps me from rushing into it.

Before I say much more, I have a confession to make: I hate smartphones and iPhones. Yet, the reality is that I do not actually detest the phones themselves, I detest how people use them. Because most cellphones are essentially miniature computers, they’ve simultaneously become an addiction for too many people. I am not ready for my preteen (or tween, as she would tell you she prefers!) daughter to be a slave to a device, and at this age she would be, so I feel I need more time to express and explain that this is not just another nugget of technology, but it’s another thing that makes it entirely too easy to ignore the world and people around you, if you let it. 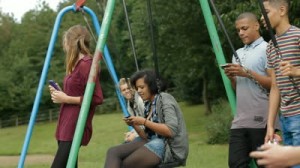 I have a smartphone like so many people do, but half the time I don’t even know where it is. I am so far from addicted to it. (In fact, I should go and make sure it’s even charged right now because my husband and daughter are gaming with their gaming group and they might try to call about dinner!) I rarely text anyone but my husband and mother. Other than that, I read my TimeHop posts when I am waiting for something or stuck in the car, and I also like to slap cool filters on a photo I’ve taken when I am checking in somewhere on Facebook. My phone is more a camera than anything else.

I did not even start texting until 2011. No joke. I just wasn’t sure I was interested in ANOTHER way for people to reach me! ::chuckle:: Beyond that, I didn’t want to potentially become one of those people who are unable to put down their phone. I didn’t want to be that mother, friend or partner who was always looking down. If you can’t go to the bathroom to relieve your bladder without making sure you have your phone on you first, you need an intervention (and to run a Handi Wipe over it on the regular!).

I have to admit to being somewhat saddened that my daughter will never know life without smartphones and iPhones as a young adult like I did — hanging out in the food court or at the beach without girlfriends’ noses in their phones, going on dates without the person fact checking things they talk about, waiting at the bus stop and actually SOCIALIZING. I find it so incredibly rude and insulting when I am sitting with someone who I am purposely spending time with and they keep checking their phone every few minutes or are texting underneath the table. I have quit hanging out with people who do this, entirely. No one should be made to feel like they need to be more interesting than your handheld device in order to have your attention when you’re together. These are things I want to instill in my daughter before I hand her a phone, just as I did with “please” and “thank you”, looking people in the eye when she talks to them, and having a firm handshake. With a cellphone comes the responsibility of maintaining your manners.

In other words, I just have to wonder if smartphones are an opportunity or a threat to potentially make too many of us rude and socially dumb?

I admit that it won’t be long before I will want my daughter to have one for safety purposes, but right now she is still at that age where she is always with an adult that I know well enough to trust will call and text me of anything important or of any emergency. The days are numbered, though, before it will be those days where we’re dropping her and a few of her friends off at a matinee on their own. At this point, it will be time. My husband and I have discussed it, and by then it will still just be a TracFone that only calls and texts. My daughter is already a coder and a gamer; when she is out with her friends, she needs to be engaging with them and not Googling or geeking out on apps. All children really need is a PHONE when they are supposed to be out living.

So, I have no advice for you. I am winging it in this department too. The only thing I am certain of is that I am going to hold out as long as I can without making her the only-kid-in-school-without-a-phone leper. ::smirk:: I suppose my suggestion would be to wait until it is necessary? That’s pretty much where we are with our daughter: she will have one when it is mandatory for safety and security. Then, of course, there’s all the safety and security issues with them HAVING a phone. Technology is both a blessing and a beast, eh?! 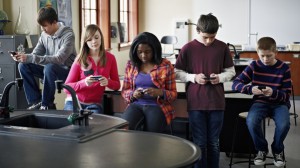 Thank you for writing in, Darci! I know whatever you decide will come with pros and cons, but one thing is for sure……it’s coming whether it’s sooner or later, so all the research, homework and thinking you do now will be worth it eventually.