Dear Gallant Girl: A Letter-lesson on How Lies Live On 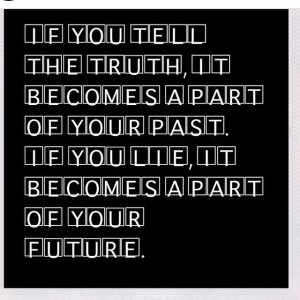 Yesterday morning I woke up to an email (gallantgirlsunite_at_gmail.com) from a young, 17-year-old Gallant Girl named Sheveta who lives in Ajmer City in Rajasthan; she wrote in to Dear Gallant Girl. Here was her letter:

I have question for you. I have my cousin who is close friend to me. Some time before she told me something that upset me very much. I was quite mad at her for a much long time. Then we talk about it again and I forgiven her. We were close for long time again, and again I find out that the what she told me was not the true either. Now I do not know what to believe! She told me that it do not matter because it is over and she will not lie to me again. She say I make it worse when I am mad and sad this day. I am hurting again. This is because I do not trust the what she says no longer. She not understand why I am mad again. I do not understand how she can not! How do I express this feeling to her? How do I make her see she still lies to me and that is still not true? I want to forgiven her one time again but I do not know if this possible ever again. Can you give me wisdom? I want to try last time to forgiven.

This is always such a difficult and sticky situation to figure out how to deal with. There are so many layers to a lie and WHY someone chooses to lie over telling the truth. Furthermore, there is the biggest layer that is so unfairly blobbed onto you so thickly now, because it fills your mind (and heart) with the question of, ‘Why did this person choose to lie to ME?’ There are many motivations, defenses and arguments as to why, but absolutely none of them are justifications. Someone who cares about you, and has been given your trust, never has a good enough reason to lie to you; that is the most important thing to remember, en premier lieu.

The second most important thing to remember is that when someone lies to you, it has nothing to do with you, really. Sure, we can think positively that maybe they may want to protect their relationship with you because they are scared of upsetting you or losing you, or maybe they are just so shamefaced they can’t muster the courage to face it head on, but their choice to not tell you the truth is all about them and how they choose to deal with the things that they can’t manage by being honest.

That being said… Every time someone makes the conscious decision to lie, it IS a direct insult to your connection or bond. No one ever asks to be lied to, so this is an unwarranted punishing act to the unknowing person the liar chooses to be dishonest with (no matter what their internal struggles are). We can break down the what-if-weres and psychology behind the lie itself, and the person’s rationale or pretext, but at the end of being on the receiving end of lying, we must first look out for our best interest. No one ever deserves to be lied to (with the exception that the receiver is a serious threat to the person telling one).

Just like this image [above] conveys, when people lie about something, it is typically to try and save themselves from the past — something they’ve done or said that they either regret or know will cause them some sort of strife and/or damage. The problem with attempting to assuage or repair a hard past with untruths is that it cures nothing; in fact, it brings that problem and past into the present even more than it was before and makes it harder to clean out the wound. Liars, no matter how good or bad at it that they are, never seem to comprehend that continuing to lie only makes the past just as real today as it was yesterday. Liars also never seem to learn that lies ALWAYS catch up with them, no matter how much time passes; and spending a life in disquiet and limbo — always covering tracks, watching their words, and waiting for the lie to possibly reveal itself — is just as distressing as facing the reality and being straight from the start. But like I said, above and beyond the damage they do to themselves, they purposely make a choice to do more damage onto others to save their own face, and this is NEVER okay no matter what they say or how many excuses they spin to mollify themselves.

Anyone who lies to you, Sheveta, and does not understand your mistrust in them afterward, does not understand the gravity of their actions. They have not been honest with themselves, either, because they have not admitted to themselves just how serious and unkind their actions were. I always tell my daughter, “Those who do not take their lying seriously, are serious liars.” Once someone hurts you deeply with a lie, they should FEEL and exhibit “true” remorse and regret. If they are not beside themselves in anguish over your anguish and disappointment, than they have not learned the valuable lesson of how hurtful it is. They have merely been caught, and now they are only saying things, again, to rescue themselves. Again. Lies, excuses, and justifications all come from the same place. If your cousin just wants you to get over it and move on, continuing to trust her word NOW, well……*she* is the fool this time.

Trust is earned. Those who lie to you have not earned it. They took that chance and now they have to put up with the consequences. You, my dear, should never be a consequence, and you do not have to be guilted into paying the price for anyone’s own poor choices and bad decisions. Never let someone make you feel like you played a part in why they made them.

I can tell that you greatly care about your cousin. That is a sign of your loyalty and love for her, and that is the character trait of a true Gallant Girl. The fact that you’re even trying to work through this to resolve the relationship is evidence that you “believed” your bond was unconditional. You can still have unconditional love for someone AND decide that you’re worthy of more than taking their abuse, however. This will become personally obvious to you as you work through the events and heal from the deception. I cannot tell you the process in steps (enduring a painful lie is a grievance!), and I cannot speak for your heart and what it can handle. Only you will be able to make that decision once you’ve had enough time to sit with it and think it all through, thoroughly. Don’t rush it. If your cousin can’t wait for you to make sense of it all and get past the emotions of being deceived, than I am a firm believer that the answers are being given to you and that they are a gift.

A person who chooses to lie needs to understand that the truth can always possibly be resolved and settled, but a lie never can. Once a lie is out there, it lingers forever. This is because a lie never settles well with anyone, no matter how much time has passed. (As human beings, we may forgive, but we never forget.) The only way to leave something behind you is to be upfront about it, 100% — not partially, not in some regards, and not through omission. And if one chooses to lie, than THEY must be able to live with the ripple effect of the ramifications. They must be able to suck it up and be the fool for awhile after they so selfishly attempted to fool someone they were *supposed* to care about, and someone who trusted them the first time. That hasty decision has quite a hang time. Maybe one day they will learn that the truth is the only way to go, and the only way to let go. First they have to let go of their propensity to hide behind them, because lies are not only the act of the vindictive, but also of the frightened and the cowardly.

In addition, reaching out to understand after enduring them is an act of honor and courage. ::grin::

Thank you for writing in, Gallant Girl Sheveta! I am sorry that you are going through this, but I wish you and your cousin only the best! The only “wisdom” I have to give you is not all that wise, but a given: First you must decide if she is telling the truth this time, and if you think that she is, will you be able to start from this new starting point? If you will be, this is a journey you must go on together, and hopefully one with closures that result in many new openings and straightforward discoveries, once the trust begins to rebuild.