Don’t Use Your Children as a Weapon 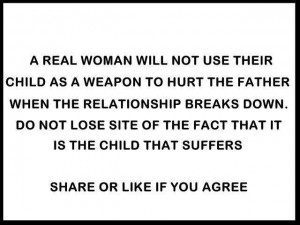 No matter what happens in your adult life — no matter what hardships you suffer, what wrongs have been done onto you, or if someone disappoints and becomes an absent or deadbeat parent — don’t fall into the quicksand of badmouthing the other parent. This, no matter what the damage, is just as damaging, as well as poor parenting. It becomes just as harmful as the other events and turmoils.

It IS, conversely, important to have open discussions about the CHILD(REN)’s feelings (not your own), get the proper therapy/counseling for them (starting with yourself), and to be very aware of creating (what I call) “False Idols”. Nevertheless, the other parent will always be your child’s biological parent. Children are instinctual, feeling receptors — not only do they feel the way about their other parent as they NEED to in that moment (whether it be wishful, hopeful, disenchanted, resentful, forlorn, angry, or hurt), but YOU need to have faith in their ability to figure life’s events out on their own when it comes to the hardships that took place between the parents. What they may need to feel now may not be what they will feel later as they grow and learn the facts of life. You can only protect them so much against the acts of another parent, but you can also only convince them so much if you’re speaking ill of the other parent. Don’t focus so much on making the other person the fall/bad guy that you eventually end up becoming one, too; one who is just as detrimental to your children’s recovery, therapy, and growth. If there’s a relationship there to foster BETWEEN THEM, you should do nothing to come in the way of that. We should NEVER — as half of their whole — help pack their baggage. We should only help them unpack. Just because a relationship divides, it does not mean our children’s hearts should be divided between the mother and father. As parents, we are only responsible for our own actions — not the other parent’s — and this includes nurturing that place within our child that is partly the other one’s.

You’re raising smart, free-thinking individuals. Give them the shot they deserve at what they deserve: to pass their own judgements, come to their own terms with past events, and do what they need to do to be healthy human beings. Our children need unconditional love and the tools to their truth, but not our guidance guided by adult state-of-affairs and conflicts.