Elf on the Shelf CAN Defy Stereotypes, Traditions & RULES! 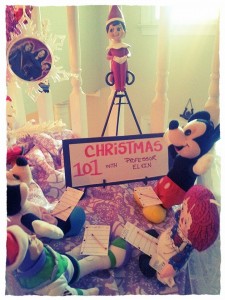 So, I have a little too much fun with this whole seasonal Elf on the Shelf thing. ::smirk:: We *just* got our first Elf on the Shelf doll last year, but I have gone a little gung-ho with it (okay, borderline clinical). Last year I bought the plastic one — not knowing the difference — because I thought it was cuter than the cloth one, but I also did not realize how challenging it would be to make him do fun/ny things because he does not bend. So this year we got a cloth one that is a girl elf. Their names are Melvin and Evie (<— full name: Cristy Evie) Elvin, and they are sister and brother. 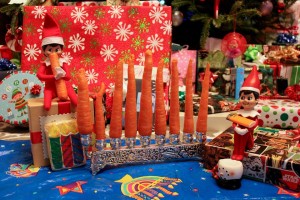 I realize that we have Gallant Girls readers from all over the world and more than 50 countries (and translating in 31 languages), so not all of you are probably familiar with the Elf on the Shelf tradition in many homes. Let me explain…

The Elf on the Shelf is a Christmas tradition that took households by storm in 2005. The story was written by an American author named Carol Aebersold and her daughter Chanda Bell. The story is written in rhyme and it tells a tale of how Santa knows who is naughty and who is nice by way of his pixie-like elf scouts that visit children between Thanksgiving and Christmas. After Christmas Eve, they are *supposed* to return to the North Pole until the following holiday season (but in our house, they do not (they return to their plastic condo bin in the attic and stay with us downstairs until January 1st)). The elves hide in people’s houses and only come out at night, but then they fly back to Santa in the daytime to give reports of the children’s behavior that day before. We have never done this in our house. I don’t believe in bribing children, let alone using “fear” or threats as a manipulation tactic to make children behave. The truth of the matter is that we can’t get our ELVES to behave! 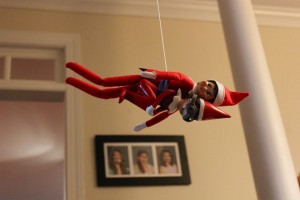 Our elves are TOTAL mischief-makers! They are not your typical elf scouts that try to coerce children into behaving to get on Santa’s “Good List” — they are utter rascals!! In fact, Evie was sent from North Pole headquarters by Santa because he caught wind of the fact that Melvin was being a terrible troublemaker. Each week, they are *supposed* to report back to the Elf on the Shelf VP, Mr. Tinselstein, to tell them how my daughter is behaving, but instead we have had to report them in their mischievousness! ::snicker:: And as SOON as Evie got here, it was like she got cut loose from the shackles of Santa’s rule because she’s far, FAR worse than Melvin could ever dream of being!! 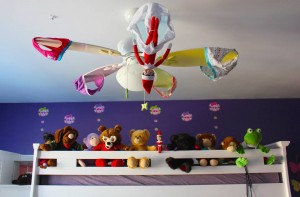 So, my friends and family are highly entertained by Melvin and Evie’s antics and, therefore, have been urging me to start a blog about them. I simply don’t have the time to run another blog on top of Gallant Girls and all my other writing projects/jobs, so I simply started them a page on Facebook; it is called The ‘Elvin’ Imps. 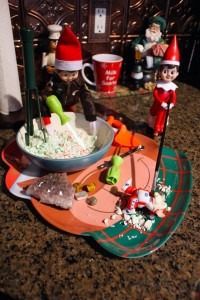 For me, this whole Elf on the Shelf phenomenon feeds into my Peter Pan Syndrome that makes me suffer from a perpetual childlike (young-at-)heart. It gives me the chance to break out of my day-to-day adult life to exercise my imagination and creativity. I enjoy getting caught up in the make-believe and pretend that is required to make these little dolls do humorous and playful things. ::grin:: Sometimes I use ideas that are 100% my own, and sometimes I put my own spin on the classics I have seen combing through on the internet — it all depends on which ones make me giggle and amuse me most that day. I love it so much that my daughter finds them when she wakes up in the morning AND when she gets home from school! 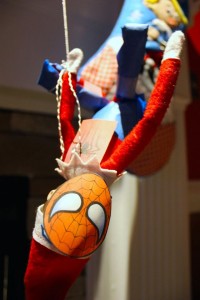 HOWEVER, I also like to make our elves do things that I find somewhat empowering or dare devilish. Rarely do our elves partake in tea parties with the princess Barbies or sit around coloring pictures of hearts and stars. They go on true adventures and are full of hijinks. I think ANYTHING, no matter how mainstream it is, can be used to teach and show examples of things that are not mainstream, per se. Oftentimes our elves are doing some pretty gross things, too, like pooping in public. ::look askance:: They’re not your typical sweethearts sent from Santa to keep children sugary sweet before December 25th, by ANY means! 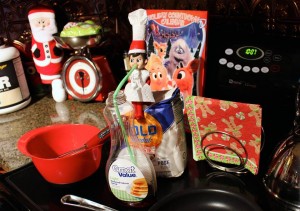 This is not to say that they are all this way, though; some of them are contrary things like corrupting our Keurig with a mess of mini marshmallows, gift wrapping the toilet, and even going to jail for attempting to act like Miley Cyrus in the Wrecking Ball video (oh yes, they did)!

Before “Liking” the The ‘Elvin’ Imps page, beware that it is not all innocent and childlike; my husband and I have fun with these dolls on our own accord, too, so some of those photos are also posted on their Facebook page. I will post the “Bio” from it, just so you understand that it’s not all gingerbread houses and sugarplum dreams:

At the urging of some of my friends, it has been suggested to me that I start an Elf on the Shelf blog, photo gallery or Facebook page. Henceforth, here has spawned The ‘Elvin’ Imps official Facebook page! It has also been suggested to me that I continue to do it all year long — not *just* through the month of December — so this *may* be a 365 day Elf on the Shelf idea page. I can’t make any promises now because life is busy, BUT I do admit to having waaay too much fun with these festive dolls (like borderline clinical fun)! So, welcome to The ‘Elvin’ Imps page. I hope you enjoy their wily adventures!!

P.S. — Some of these Elf on the Shelf ideas will be purely for children; others will be more for adults. However, none of them will be too-too “naughty” in content, so they should all be suitable for all Facebook audiences. *Should* being the operative word. Melvin & Evie’s impishness has to come from somewhere, after all, and I tend to have a bit of a black sense of humor at times. ::smirk::

Nevertheless, our elves have also gone bungie jumping off the second story catwalk, taught college courses in Christmas studies, had an archeological dig in candy cane rubble where they execrated an ornament from 1988 for the Santa Smithsonian in the North Pole, became Spiderman from our mantle and avenged anyone who tried to sabotage our holiday spirit, attempted to educate themselves in other religions (even though they filled the menorah with our reindeer food instead of oil and wicks), created very death-defying rides and charged admission, went to culinary art school and became a chef, celebrated the LBGT community by learning the Y.M.C.A. song with Evie’s lesbian, bisexual and straight friends, and they have gotten into working out and yoga recently, to boot! (See: photos throughout this article) 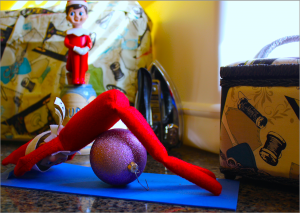 Make your Elf on the Shelf days interesting, creative and unique, Gallant Girls & Guys! Have fun with it!! My daughter is 11 and knows I do all of them, but she still has a blast finding them each day. And just remember: they don’t have to be delicate or perfect little angels — they are a toy designed for you to use your imagination. They can make your children laugh and show them how fun and humorous the holidays can be. I’m not one to abide by all the rules and I like to make things my own. As you can see, we’ve completely abandoned the original story and made it ALL our own!

Have a very merry and mischievously playful holiday, my friends, no matter what you celebrate! 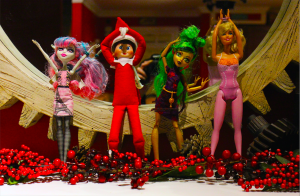