Emotional Abuse is Just as Damaging as Physical Abuse 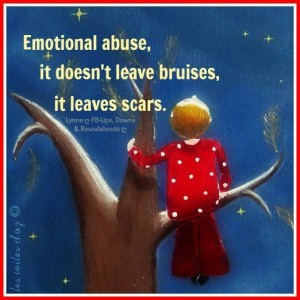 Too often people are taught that abuse is physical, and only physical. I’ve heard so many people say, “They’d never hurt me, though.” This directly after telling me s/he told them something was wrong with their physical appearance, publicly poked fun of them or made them the brunt of a joke, or put down the way they did something. There are plenty of other ways to hurt someone, and *just* because you don’t physically lay your hands on them, you can lay verbal and mental assault without any repercussions whatsoever. People do it every day and consider themselves good people.

If you hurt ANYONE with the intent to hurt them, you’re being abusive. The first step is admitting it, the second step is to seek help to change it, and the third step is to apologize. You don’t have to see a scar to leave one; and physical scars sometimes fade, but verbal and mental scars are permanent. Take ownership if you’re someone who does this and would be someone who would say, “I would never hurt you with my hands.”

If someone corners you, but never makes a fist, they are still abusers. (It’s a form of controlling.) It is the same with words and manipulation. You will one day have to protect yourself, and chances are that they will turn around and tell YOU you’re out of control, have anger management issues, or are a violent person. If you’re the receptor of any form of abuse, get out of the relationship (whatever kind it is) and walk away.