Just Calling Yourself a Male Feminist Does Not Make You One 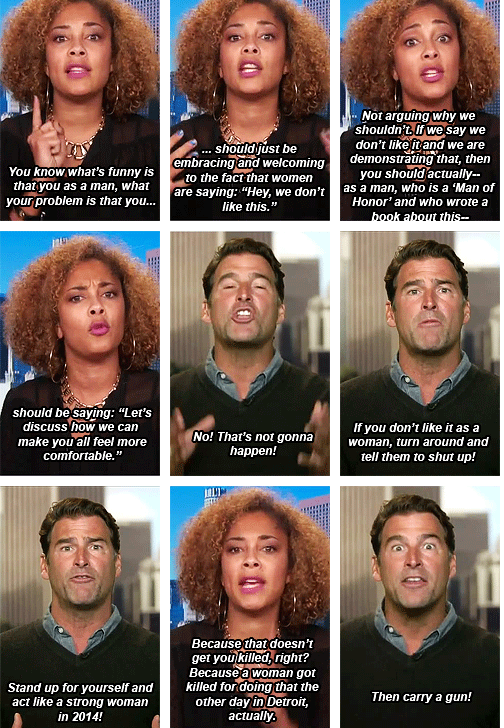 This is the maddening and unnerving circle conversation that just keeps going when, AGAIN, there’s always a clear path from A to B. The reality is, we’re never going to live in a society or world where we will be safe from harm. No matter how far we come in the fight against misogyny and sexism, there will always be rapists, murderers, pedophiles, madwo/men, and just plain uncouth, lewd imbeciles. You don’t have to have any certain anatomy to be these things. We must have hope and remain optimistic that we can affect change with education and higher pursuit of penalty through law, but we also must be realistic and protect ourselves. As women, we must all take self defense courses, carry mace, watch our surroundings, be mindful of where we are and who we’re with, etcetera, etcetera. Being aware and proactive does not mean that you’re accepting of the state of the world we’re living in, or pacifying sexists; it simply means that you have to do whatever it takes to stay safe.

The ANSWER does NOT lie in teaching women how to defend themselves. The answer lies in reforming, penalizing and not raising sexist perpetrators. The answer lies in quitting making this a WOMEN’S ISSUE and recognizing that this is purely a MEN’S ISSUE. (Before anyone protests that last statement: Yes, there are definitely women sexists, but until men start coming forward about their female predators, this is not an issue we read about in media enough for us to even feel there’s a need to stand up for it, which is sad if it’s as big of a problem as we see that women have on their hands! I would stand up for anyone who needed someone to fight for them. Gender is no boundary whatsoever.)

No one ever asks to feel frightened, feel threatened, feel objectified or feel used. It only happens when there are people out there who do it for sport. It is plain and simple: We live in a culture where we have no other choice than to *always* be on high alert, and we must always know how we’re going to protect ourselves from aggressors and perverts and misogynists. YET, we also live in a culture where even our fathers, uncles, husbands, brothers and mentors are taking advantage of women while preaching against misogyny for their loved ones (daughters, nieces, wives, sisters and students), but then participating in sexism and misogyny every day. In other words, even men like this man who is arguing his point and considers himself a supporter of women’s rights, are still not strong enough for there to ever be the kind of equality, respect, dignity or safety that women undoubtably deserve. And for this, we are still objects and second class citizens. The truth is a hurtin’ thing, but just calling yourself a male feminist does not make you one. You have to ACTUALLY BE one. You have to get your facts straight from a woman’s perspective and angle, and you have to be that advocate and “good man” even when no one is looking. A strong army is not built on lukewarm, weak soldiers.