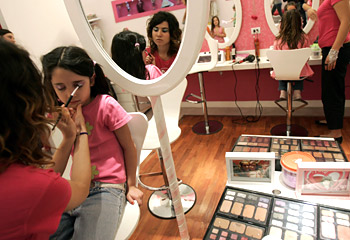 I have never even THOUGHT about dragooning my daughter into “fixing” her already-perfect self. Yes, my daughter has very (gorgeous) bushy eyebrows. She also doesn’t like to brush her hair thoroughly. She also doesn’t always care what she has on, or if her socks match (<– a touch she got from me). Right now, my daughter has hit puberty and has hairy armpits. We shaved them once when summer hit and she knew she’d be in sleeveless shirts often, but she just isn’t fazed by them all that much yet, and shaving ended up being just another nuisance to her. I don’t push any of it on her because she’s only 10! Right now, my daughter cares about starting Oblivion (The Elder Scrolls IV (oh boy does she ever!!)), whatever the “Limited Time Only” Blizzard is at Dairy Queen, what new recipe she’s going to try over the weekend, and if she can find an earthworm whenever we plant something new in the yard. She does not have her mind in a mirror, and I want — hope and pray! — that she can stay that way for as long as she can, if not forever. I’ve never once told her to “smile and look pretty for the camera”. We make goofy faces, we relish albums of candid shots, and I want her to look as she does all of the time: like herself. I don’t want to tell her that she’s not okay without a little lipstick or blush on her cheeks! I don’t want to tell her that any portrayal of her is not frame-worthy because she’s not striking a pose and beaming like she’s living the life of Riley all of the time. And I sure as heck don’t want her to start picking at herself for things she doesn’t even notice about herself at all! She has a whole life ahead of her where she will have to combat what society and media are trying to convince her is wrong with her. Why on earth would I ever push her into it at home (from her mother who she trusts more than anything, no less)?

Let them worry about cavities and picking scabs, not their eyebrows and if they don’t have enough color in their cheeks. Let them be messy when they CAN…… without critique. They are perfect just as they were born.

Read the inspiration for this article here: Stop Trying to Fix Your Daughters

Tags: Advice Advocate Anti-objectification Anti-patriarchy Anti-sexism Children Educate Empowerment Gallant Girls Girls Can Do Anything Growing Up Mother and Daughter Stand Up For Yourself and Others Women's Rights
Share
0