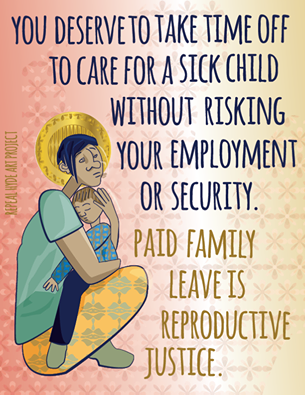 As a former single mother, this is so very important. A society that puts a child’s wellbeing behind the importance of the workplace is simply saying that a parent’s job is not the #1 priority, and that is just fundamentally wrong and backwards. Without well-rounded and secure people to work those jobs, our civilizations would be in the toilet to begin with. The only way we get these well-rounded and secure people is to offer children those things in their formative years.

When I was a single parent, I actually lost a job because of the number of times I had to stay home to take care of my daughter, or got called away from work (she was having very bad sinus issues back then). I had a very understanding and supportive boss in the beginning of my stint there (who was so wonderfully generous with me!), but he ended up getting sick with cancer himself, crestfallenly. When his position was replaced, my new boss took me off the day schedule completely. When I asked him if I was fired, he responded with: “No, you can work any of the night venues we have.” (My technical position was in security.) When I was a new hire, right there ON my application, I stated that I could not work nights. My daughter was only 3 and 4 at the time; she needed me at home. When I told this new employer that, he essentially said, “Tough. That’s too bad for you.”, but in more PC, un-punishable terms, of course. (These night gigs were not even uniform. There were only a few a month, and they ran until sunrise sometimes. Nothing that would have put food on the table and paid the bills, or anything you can find a dependable sitter for.) Au fond, what this bossman was doing was keeping me on payroll knowing I couldn’t make those hours, all so that I could not collect unemployment. It was a mean, lowly, dirty trick to pull on a single mother — and a dirt poor single mother, at that! — so I decided I was not going to take that treatment sitting down. I fought the company for unemployment on principle alone. You can bet your bottom dollar (and I did!) that I won it too!! So, the moral of this story is. . .

Voting for reproductive justice does not *just* mean the rights to abortion/the morning after pill and birth control, like so many people think. You must take the time to educate yourself and read the fine print; voting against reproductive rights may just put your paycheck in jeopardy when your little one needs you at home to love them, nurture them, and nurse them back to health. I’m sorry, but when my daughter is sick, there is NOWHERE else she should be but in MY arms. Anyone who is going to try and tell me any differently is going to have to put up with the fallout of my determination to prove just how crooked and unscrupulous that is to not only the parent and child(ren), but also to humanity.